On Tuesday, October 22nd, XMR is correcting after two days of growth. It is generally trading at $55.74.

On D1, the Monero price keeps demonstrating a downtrend. It should be noted that on the MACD, a convergence and a Gold Cross have formed, which points at a correction or even a reversal beginning. The aim of the correction might be at the resistance line and $65.00. A breakaway of this level may let the quotations go higher — to the projection channel and the level of $86.00. However, if the correction ends at the resistance level, the next declining impulse will go to $40.00. 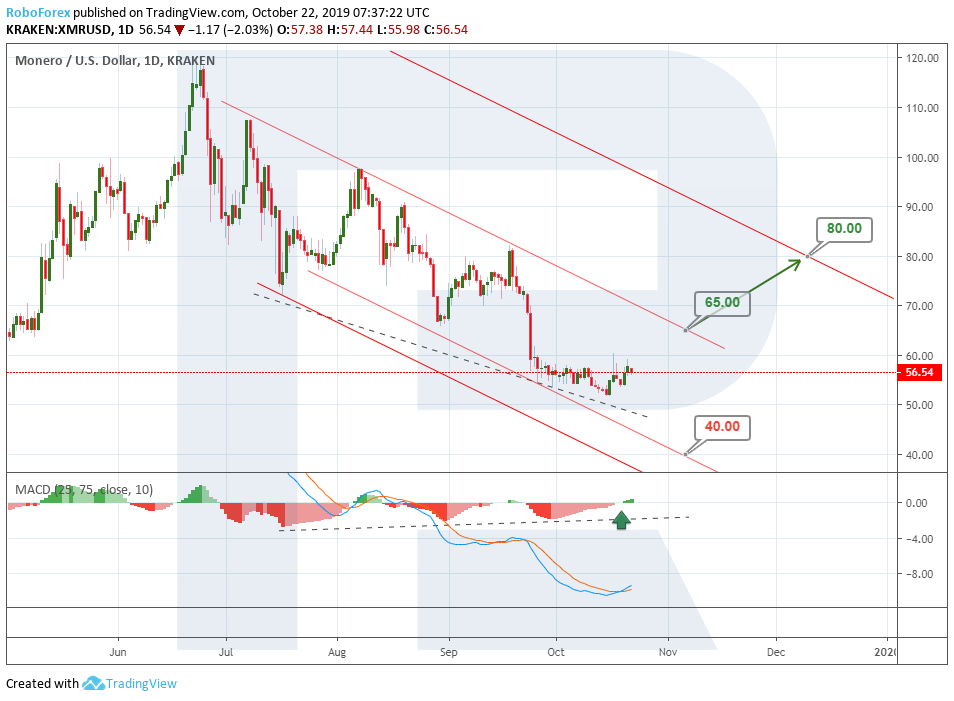 On H4, the Monero is forming a correctional Triangle after a strong impulse of decline and a convergence on the Stochastic. If the quotations manage to escape from the triangular range upwards, they are likely to rise to 38.2% ($63.45) and 50.0% ($67.06) Fibo. The control support is at the minimum of $51.75. A breakaway of this level should signal the end of the correction.

In WAV audiofiles, hidden Monero miners have been found. Into the infected files, hackers have placed a certain code connected to a XMRig miner and meant for mining the XMR cryptocurrency.

It was not quite easy to understand that some files were infected. Some of them played back normally, some had white noise but nothing could tell that the files were damaged.

According to BlackBerry Cylance experts, the frauds used stenography-based methods, which let them hide the content inside the files causing as little damage to the file structure as possible.

There is not much fundamental support to XMR. What is worth paying attention to is the news that the BTSE exchange is launching spot trading of this cryptocurrency. As the exchange representarives have noted, the Monero popularity is growing, so its listing looks logical. One undoubtful advantage of the Monero for the users is its anonymity, which enhances the safety and privacy of transactions. In the modern financial world, it is valued as high as decentralization.