The highly anticipated addition of Bitcoin to the Opera browserãs cryptocurrency wallet has finally happened with the launch of the latest iteration of the Android version of Opera. Not just that, Opera also added support for Tron and its DApp ecosystem.

In the press release of the launch of the Opera for Android version 54 on Tuesday, Opera said that “You can now choose to add a Bitcoin card to your wallet, making it possible to send and receive money from the web.” The new version is more of an improvement to the design and user interface making it more attractive and easy to navigate.

“Version 54 comes with a major design shift, with which we go beyond dark and light modes and add plenty of colors,” the press release reads.

Initially, Opera launched its cryptocurrency feature with exclusive support for Ethereum and its ERC-20 tokens and dApps. This means that users of the Opera browser are able to interact with their favorite Ethereum dApps through the browser interface without installing additional add-ons. With the addition of Tron, the browser has now expanded the same functionality to the Tron blockchain and dApps on the Tron ecosystem.

Operaãs aim of improving on the cryptocurrency feature, as revealed by the companyãs head of crypto, Charles Hamel, is to “accelerate the transition of cryptocurrencies from speculation and investment to being used for actual payments and transactions in your daily lives.” 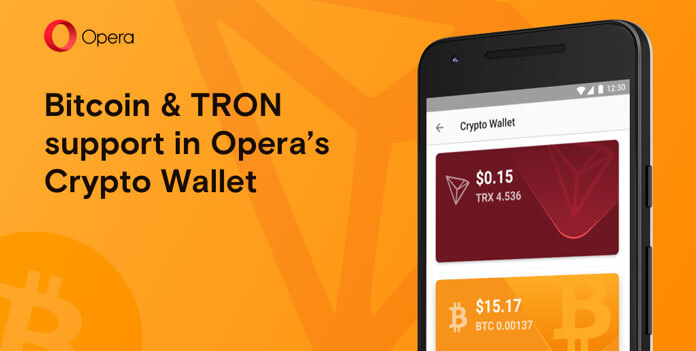 So far, it is arguable that cryptocurrencies have found little application outside speculation and that is because their usability and adoption metrics are still minimal compared to other established technologies.

Expanding on the hope by Opera to ensure blockchain gains utility across the world, Tron wants to make sure blockchain is ubiquitous. Tronãs head of marketing Ryan Dennis said that,

“Through social networking, gaming, and entertainment, TRON is moving on all cylinders to unite the cryptocurrency community and bring blockchain to everyone.”