Bitcoin is revolutionary. Based on the powers of distribution and decentralization, placing choices back to the hands of the deserving masses, Bitcoin is always viewed as a threat by entities in the financial system.

For good reasons, Satoshi Nakamoto, despite being anonymous, was futuristic and envisioned a world where banks would have no control of the destinies of millions during crises.

As the effects of the great financial crisis unfolded in 2008-09, he launched Bitcoin.

Reception has been mixed and while there are opposers, proponents see the future the money. However, that is not the case as per the view of the former European Central Bank (ECB) president Jean-Claude Trichet.

Speaking during the Caixinãs Annual Conference, he slammed Bitcoin and Libra as “not real”, speculative, unhealthy and not the future of money:

“I am strongly against Bitcoin, and I think we are a little complacent. Bitcoin itself is not real, with the characteristics that a currency must have. Even if cryptocurrency is supposed to be based on underlying assets, I am observing a lot of speculation. It is not healthy. “

Trichet position comes at a time when China is reviewing its stance on Blockchain. Early this week, officials from the worldãs second largest economy was quoted saying Bitcoin was blockchainãs first success.

By allowing people to send and receive money without identification, officials said the coin is both useful but dangerous due to the propensity of criminals to use the network to perpetuate illegal transfers. 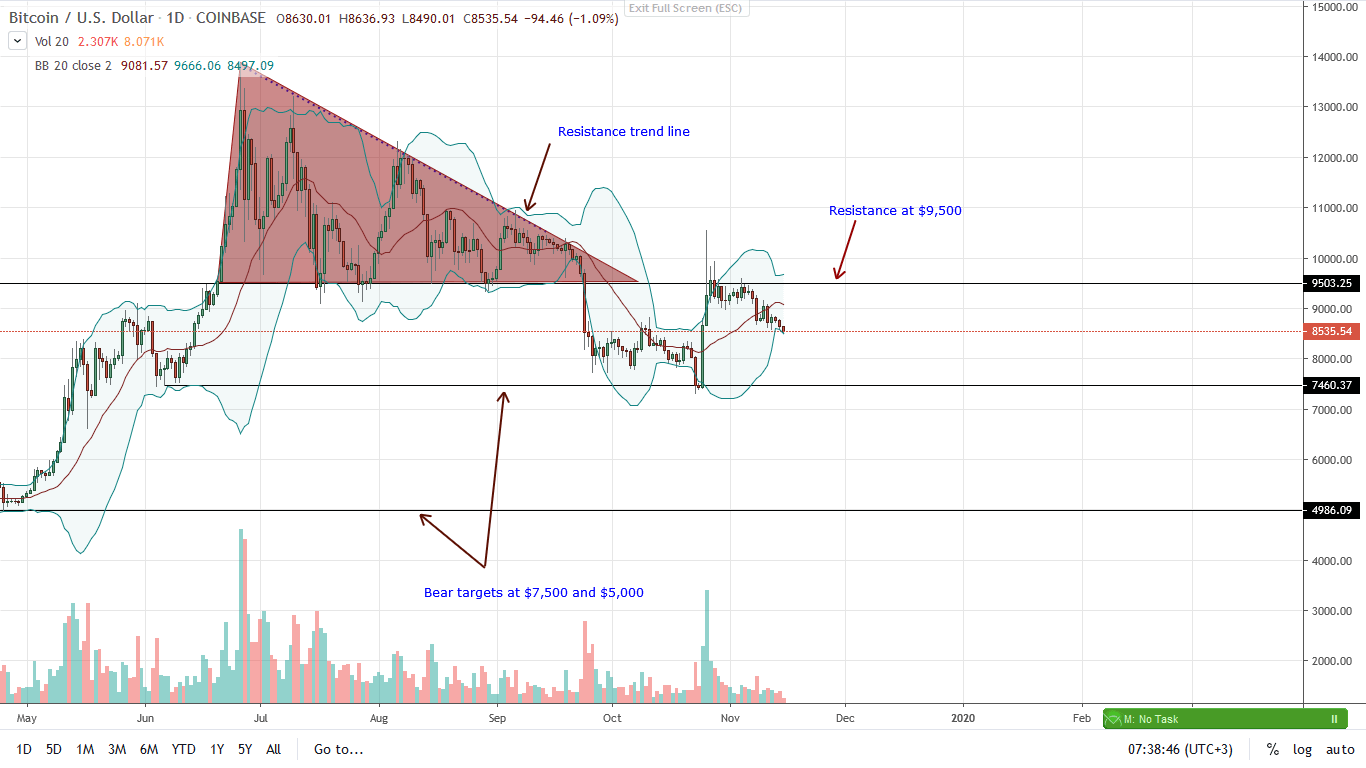 At press time, Bitcoin is hovering around the psychological $8,500 support level, pushing market participants to the edge. Despite fear that is engulfing the market, contrarians could play out and BTC rally in line with Oct 2019 price action.

Technically, BTC is consolidating against the USD. If prices drop below $8,500, BTC could tumble to $8,000 or worse to Oct 26 lows of around $7,400-500 in an unwelcomed retest discouraging participation.

On the flipside, if bulls flow back and prices edge above the 20-day moving average with decent trading volume, BTC could reverse Nov 8 losses.

In that case, a three-bar bull reversal pattern will print as buyers aim at $9,500 in an encouraging trend continuation pattern that could spur BTC bulls as the year ends on a strong footing.

As it is, aggressive buyers can buy the dips as long as prices are trending above $8,500 main support.