RIFT-Protocol Is the Future of On-Chain Data Storage

Cloud storage has been the go-to system previously but it has its setbacks, namely:

Syncing expenses- The cloudãs pay-as-you-go model can turn out to be expensive if calculations are made in the long run despite the flexibility and lower hardware costs. Constant syncing of all users and their devices to the cloud can also lead to increased bandwidth overhead.

Single point of failure- Since cloud computing services are internet-based, service outages can happen anytime and can occur for any reason and you have very little control over the whole situation. If a central controller is compromised, your data could be compromised as well.

Data Leaks- Itãs a daily occurrence for server misconfigurations that lead to data leaks. One recent such example is the leak of a Dow Jones Watchlist Database, containing identities of government officials. As long as there is a human factor involved in data transfer, these situations cannot be avoided but part and parcel of centralized cloud storage.

Privacy concerns- Providers like Amazon, Google, and others storing information on the centralized cloud servers are required by the CLOUD Act legislation to submit evidence of details to law enforcement on the strength of a warrant. This legislation is enforced on stored data of organizations including the details if itãs stored in another country or server. Compliance and management are handed over to the provider and totally outside of user control even for GDPR, HIPAA, SOX, and similar regulations.

A simple way to avoid the costs and contamination of the blockchain is to store hashes instead of data. But off-chain data storage comes with its own set of flaws. To ensure secrecy and security for certain use cases, the data should be encrypted before hashing it.

But the biggest problem which confronts blockchain systems is not only storage but scalability. The good news is RIFT Protocol, which defines ILCoinãs Decentralized Cloud Blockchain (DCB) has already solved the scalability problem while it solves on-chain storage.

These are the features of the DCB and RIFT which allows on-chain storage of files in unlimited volumes. 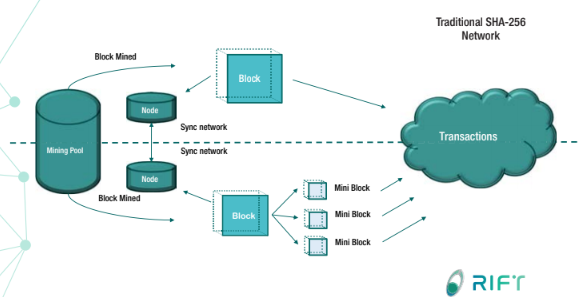 5.  Mini-Blocks are the same as the traditional blocks except they are not mined. They are replicated in the same way as fractals.

A Mini-Block hash is generated automatically by the code which eliminates the need for them to be mined. They are contained as a layer inside the traditional (parent) block by way of a reference system. RIFT makes possible the processing of a huge amount of transactions through the Mini-Blocks which expands the capacity of the parent blocks.

Rift-Protocol is the foundation and basis of DCB. Setting up an on-chain based data storage system like Decentralized Cloud Blockchain cannot be done without the Rift-Protocol.

Rift-Protocol has an enormous transactional capacity, it is capable of even faster transactions that the system of VISA is. In case of a 1.5 GB block size, its speed is 33,888 TX/s, if block generation is realized in every 5 minutes.

The post RIFT-Protocol Is the Future of On-Chain Data Storage appeared first on Live Bitcoin News.